Last year, along with all the other dreadfulness, the Baltic contemporary art gallery in Gateshead weren't able to hold their annual Small Press Artists Market (S.P.A.M.), so they put out an open call for work reflecting on the themes of the year for a zine instead.

The resultant work, S.P.A.M. Spreads #1, was going to be released in their shop - buuuut lockdown meant no galleries open over the winter. This hasn't stopped them getting this lovely work out there though - just send them an email and they'll send you a copy! Incredible! Details here: https://baltic.art/spam-spreads-2021 - be quick though, who knows how long stocks will last. 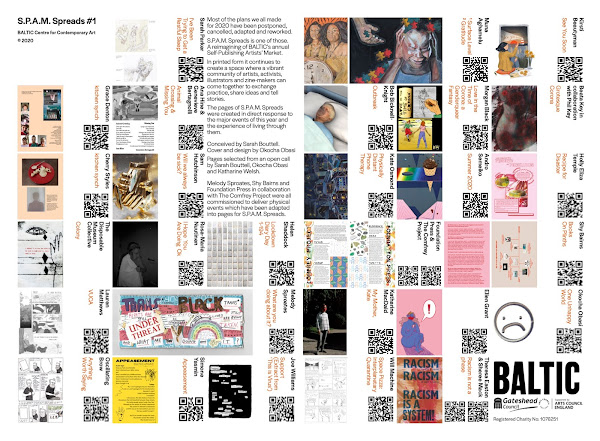 My page, 'Anything Worth Saying', is a typically self-regarding piece about how rubbish everything is, but how uninteresting that is to say, and maybe how that's like a vicious circle; and also: how much Hitman I've been playing instead of doing anything productive. 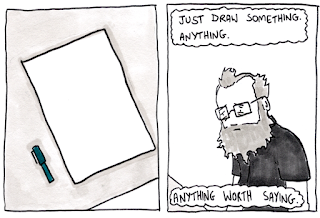 Hopefully there'll be a S.P.A.M. Spreads #2 sometime during 2021 (and hopefully it'll be a better year for art (and everything)).

Email ThisBlogThis!Share to TwitterShare to FacebookShare to Pinterest
Labels: comics, PICTURES WHAT I'VE DRAWN, this is the kind of spam you DO want to receive

2020 through the medium of minimum viable comics

2020 has been... a difficult year. In the scheme of things, it's been more difficult for other folk than me, but, still, it hasn't been a vintage year for Oscillating Brow creativity.

However, one thing that has kept me going creatively is Paper Jam's monthly theme challenge.

It's as simple as the group picking a theme, then anyone who can summon the creative oomph does a comic or sketch or whatever on that theme.

Little did the group know when starting this in January 2020, this would be the main form that Paper Jam would exist in, after it stopped meeting in person for the first time since it started in 2007.

Anyway, you can read the whole lot over on the jams blog but these were my contributions: 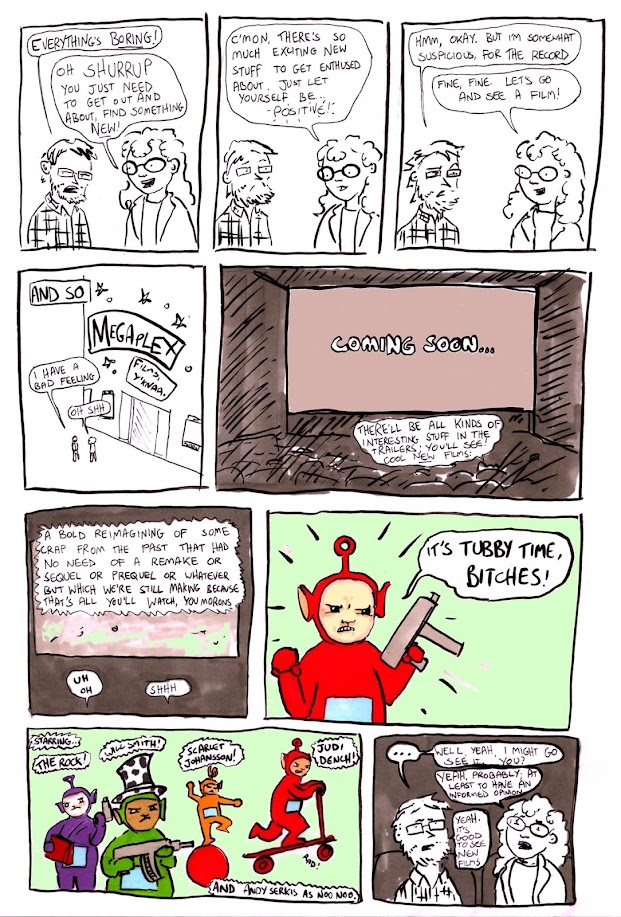 March. Theme: 'ROMANS'. Maybe he just got confused between an oar and a bat. 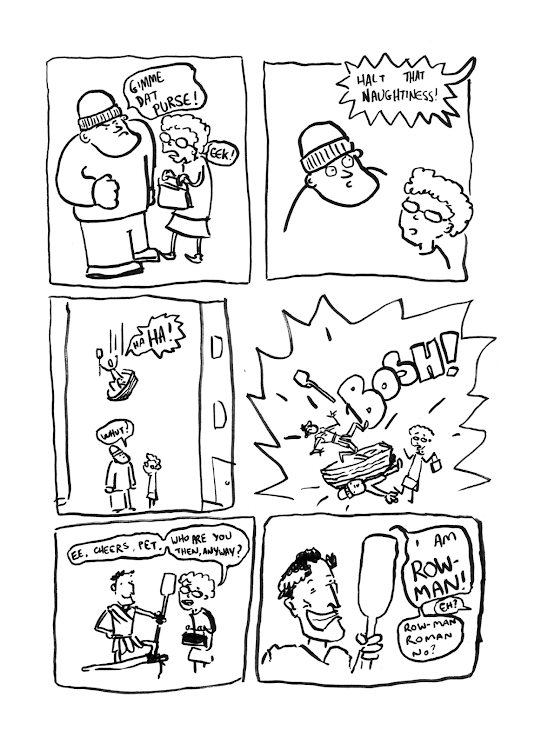 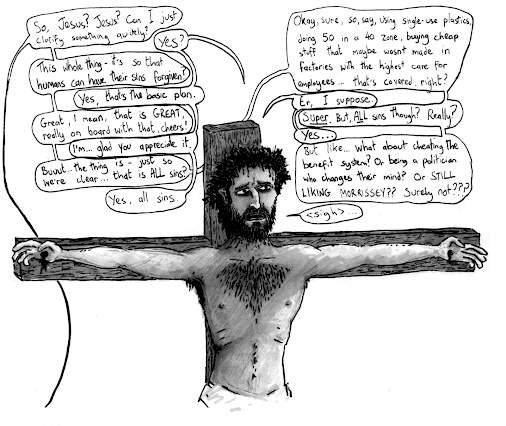 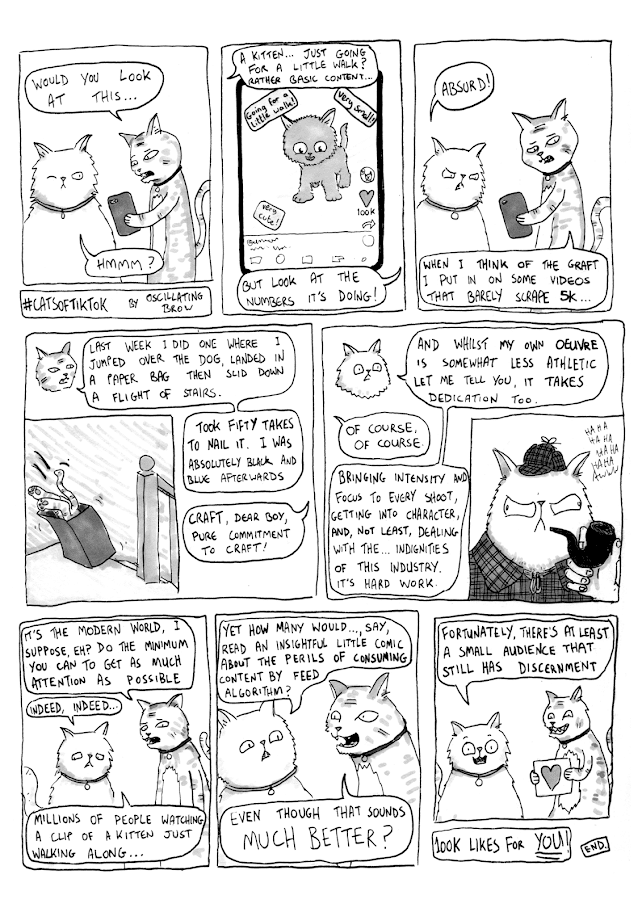 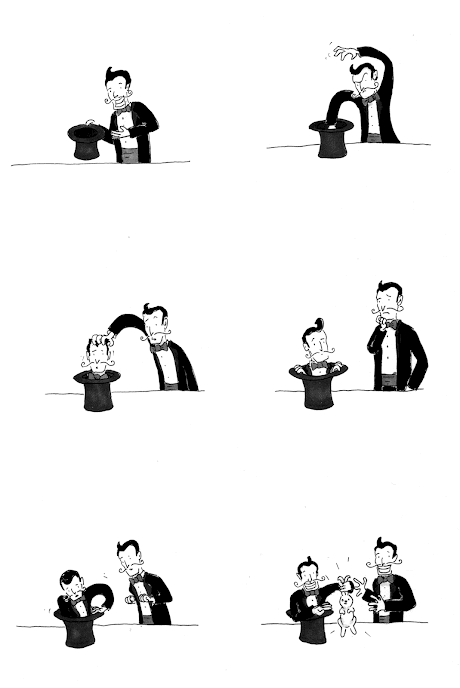 PART 1: "I know things have been rough" 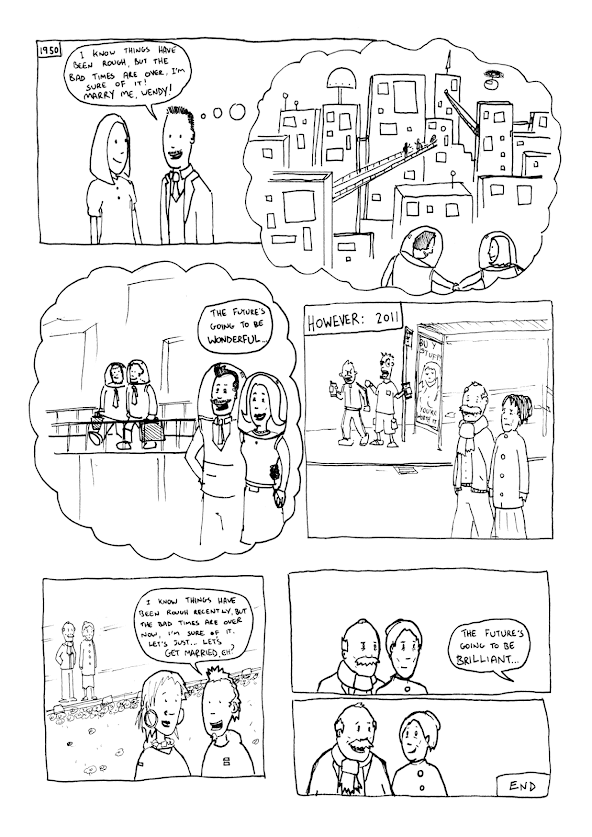 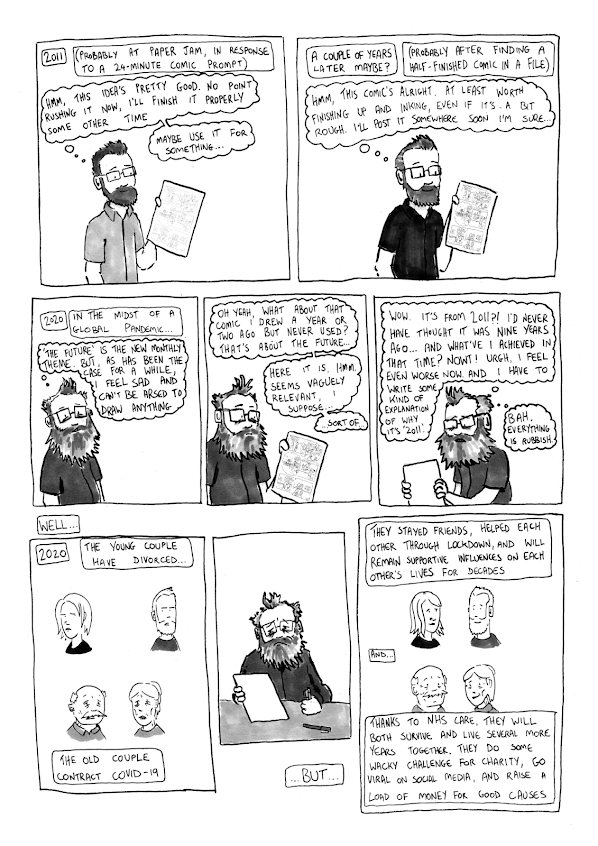 August. Theme: 'DUCKS'. Entirely invisible and not suspicious at all (and aren't there a surprising number of these boxes around the place?). 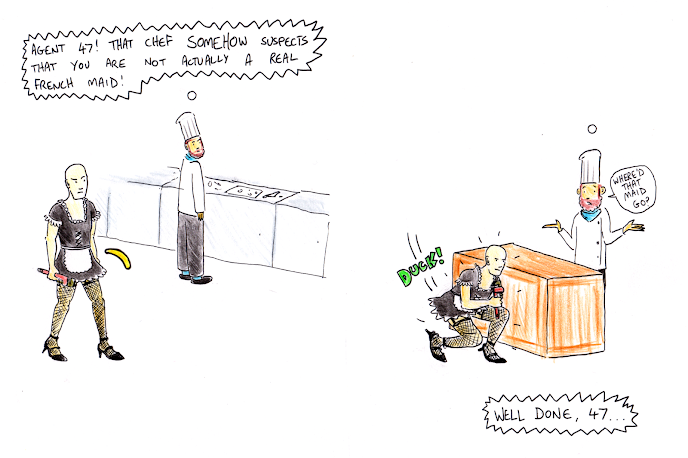 September. Theme: 'BACK TO SCHOOL'. Back to School! 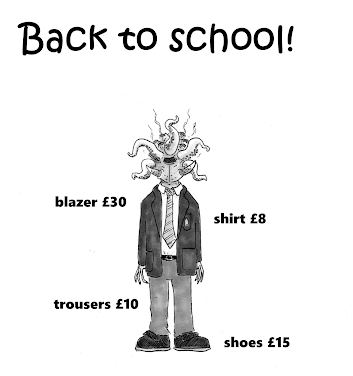 Email ThisBlogThis!Share to TwitterShare to FacebookShare to Pinterest
Labels: 2020 stinks

It's summer, and, with unusually good timing, Paper Jam is releasing its latest themed comic anthology You Need A Holiday ...And That.

I did the cover - or at least assembled many of the visual elements of it before Paul Thompson rejigged the layout and sprinkled additional photoshop filter magic upon it (before a final polish from Brittany Coxon). Frankly, I think it came out quite nicely... 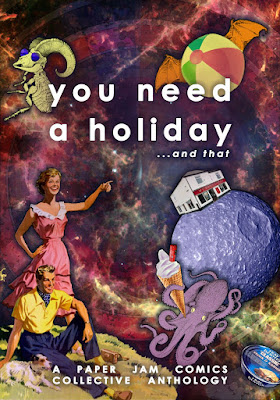 Bit of a nod to Coldwar Steve in there, who is definitely the artist for our times. However, I should point out I've been a fan of collage for many years, most notably evidenced by my pieces for the Invisible Beasts art anthologies. This time working digitally was odd - in many ways easier, but in some ways harder.

Additionally, did a little one-page comic 'Sick Of Here' for the anthology. It's about equating literal place with metaphorical place, and being fed up with where you can't get away from. 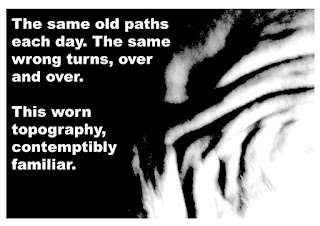 You Need A Holiday ...And That is being launched at our 'Summer Comics Jam' Canny Comic Con event at Tyne Bank Brewery in honour of Small Press Day. 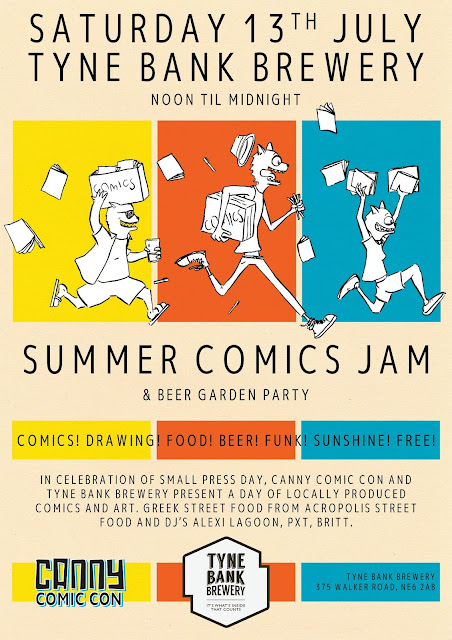 Where Alexi LaGoon, PXT and Britt will be DJing - bringing the glory days of Exchange Free Range's eclectic auditory cornucopia to a new and unsuspecting audience.

It'll be mint. Get yerself along. Buy the comics. Dance. Dance Dance.

Information regarding the notorious...

Oscillating Brow
Essayist! Iconoclast! Buffoon! Occasional maker of comics, and even more occasionally of films, music and suchlike! Unstoppable force of mediocrity in the arts! Based in the north east of the country of England, on Earth.

Have a look at the latest Oscillating Brow comics on the PJCC's 'Paper Jams' webcomic blog...

According to the unstoppable LONKBLIG link blog...

Links To Things Of Interest

"representing mediocrity" i hear you cry (1) 2020 stinks (1) actually my next comic will be SPHERICAL (1) also going to try and resist playing Thriller (1) And That (13) astoundishing = astonishing + astounding + your face (1) cavemen saying 'dude' is funny right? (1) comics (26) computers are okay (1) creature from the funk lagoon returns AGAIN (1) don't label me with your labels (1) exchanging soles for soul (1) Fan Art (9) going anywhere nice? (1) hey at least it might be the end of the world (1) how bad is bad (1) how fast is a running buffet (1) how is the monkey balancing? (1) i know you got soul - if you didn't you wouldn't be in here (1) i literally sold enough comics to buy a pint and that my friend is what i call success (1) if only every twenty four hours could be as productive (1) iron man had a P.A. to shoo people out of his way (1) it's a film of a comic that's about comics huh? (1) its like art but in a comic (1) mashups of the year (1) music (11) no I'm crying on the inside too lol (1) no self-assembly required (1) NYEah! (1) oh and it's about monsters (1) oh god please don't let 'twitterstorm' be a real word (1) PICTURES WHAT I'VE DRAWN (23) possibly knowingly ironic or just stupid (1) seriously making kites is flipping brilliant fun (1) something about 'toon' (1) spiky (1) still kinda visible (1) super spooky scary stories summary stoking subsequent sales silliness (1) surely everyone likes liking things like the things they like (1) Tales Of Extraordinariness (6) the adventures and the comics and the machine are all amazing (1) the funkiest butts around (1) the premise is in the title (1) the pun is admittedly somewhat tenuous (1) the tag is tag (1) there may be other better comics also available unfortunately (1) this is the kind of spam you DO want to receive (1) though i do literally mean about one or two (1) three hours is still technically "within twenty-four hours" isn't it (1) we figured y'know beer was like complimentary for the band? (1) well obviously *kind of* visible (1) wi' jam in (1) wolverine also loves party rings (1) wooo look at me I'm so edgy (1) words AND pictures chumps is what we are (1) writing about things (3) your family holiday does not interest me at all (1)